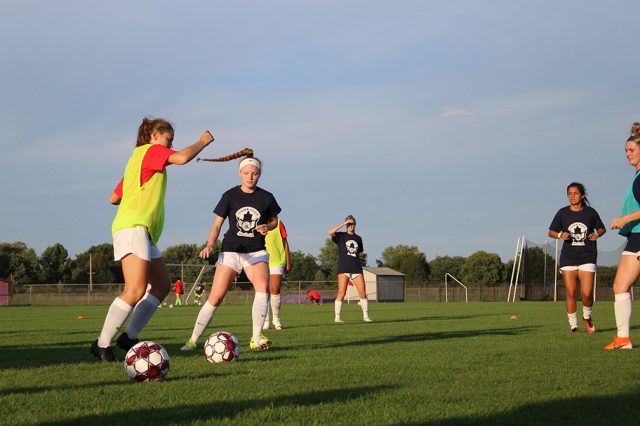 On September 7th, the Goshen College women’s soccer team competed in a home match against Cleary University. But this match was more than just another game. On this match, the team honored first responder firefighters and police officers in a night called First Responders Night. The Maple Leafs wore both red and dark blue shirts in honor of the event to show their support towards the local fire and police departments in Goshen.

Benjamin Cotton talked with Megan Bower, a senior midfielder for Goshen, to get more insight on how the event came to life. She talks about how Harold Watson, athletic director at Goshen College, is encouraging more engagement with the Goshen Community and the captains decided on four different nights to show support. When Bower heard a member of the team mention first responders, she said, “I was the most interested in that one because I thought it would be a cool event to plan.”

Justin Crew, head coach for the team, was on board with this idea, stating that, “We wanted to celebrate them and everything that they do for the community.” Along with celebrating the night, the team also picked up the win, defeating Cleary 2-1. Coach Crew felt great about the team’s performance on a special night.

The team will also be hosting nights to raise awareness for breast cancer and a night with the Goshen Youth Soccer Organization, or GYSO. More information about the women’s soccer team and all Goshen Maple Leaf athletics can be found at goleafs.net.