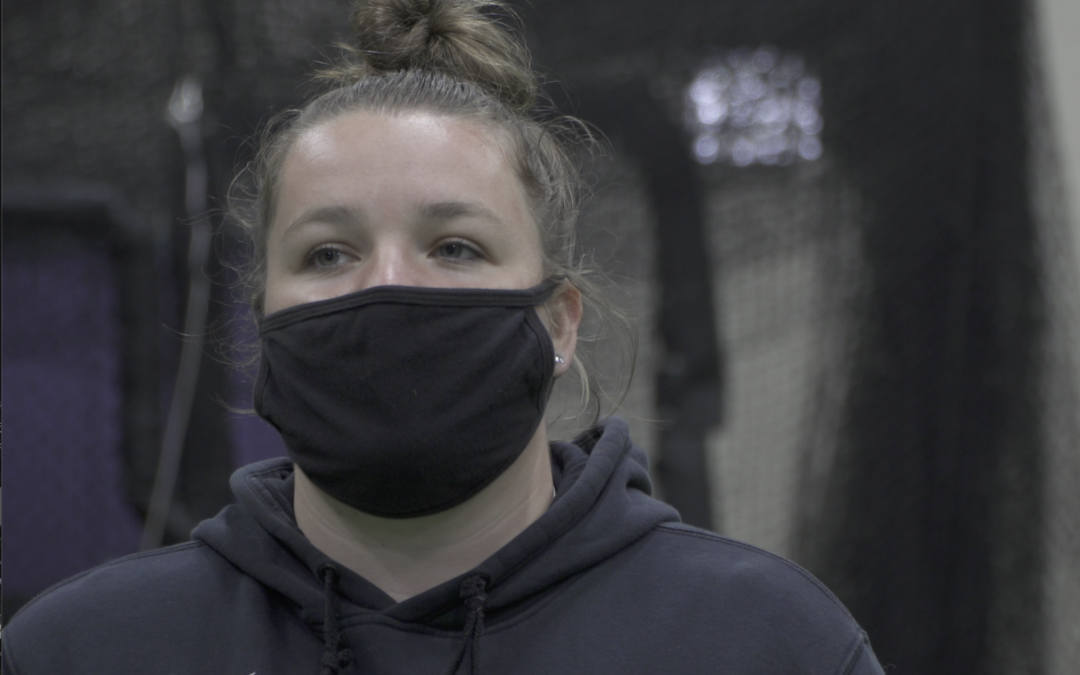 Senior softball catcher for the Goshen College Maple Leafs, Rianna Koteles, has seen some success over her four years in the Purple and White. She reflects on the journey to becoming a Maple Leaf.

“When I was playing travel softball growing up it was always a huge deal to get recruited by college coaches,” said Koteles. “[W]e’d go to these college showcases where there’s tons of coaches there watching your games, but there was one tournament we went to colorado which was a really big deal that was our biggest showcase. I met Kristin Coulter and she was the one that kind of gave me her name and the school and she said Goshen College is like 950 students and that’s super small, that’s smaller than my high school, but I just kind of kept her name and goshen college in the back of my head. Then you know it was my senior year of high school I was like talking to other schools and then I came on a visit to Goshen College, and I realized Goshen College has a huge a really well recognized education department, and I knew that Goshen College was the place i needed to come because of the great athletics and academics.”

“I came from being in high school where I was super involved in different clubs and activities as well as being an athlete, and actually a multi sport athlete. So it was something you know I was super involved in stuff and then once I came to college and played at the collegiate level it was soon you’re playing one sport that’s your focus and you’re here for sports and academics so making the transition of you know you’re waking up at 6 a.m. for practice from 6 to 8 [a.m.] and then have to go to class all day come back do homework and then maybe have an afternoon practice too. It was definitely a lot of time management and you know sometimes social life had to take a backseat and like some other parts of your other hobbies and stuff you weren’t necessarily getting to do, but then you know you get used to it and then you’ve soon fall in love with it and that’s why i’m here in year four.”

She has seen plenty of success during her time at Goshen, as she is number one all-time in triples in Goshen College softball history and also was a part of a 2019 squad that set the record for most wins in a single season.

“I came from a pretty successful travel ball team and high school team,” said Koteles. “So now being on a team here at Goshen College where we’re being very successful we have really talented athletes on the team. It’s just super fun, it makes it not only about being together but when you win it’s just even more fun and it makes it all the time that we’re putting in just that much more worthwhile.”

So with the COVID-19 pandemic she is eligible for a fifth season and recently decided to take the opportunity to come back for one more year.

“Honestly it was just the team and the team dynamic and my teammates,” said Koteles. “I’ve loved all the teams that I’ve been on here at Goshen College, but the girls that have come in this year and just the way that we work together they make it they make it really fun and it’s something that I if I were to not come back or if i knew 10 years down the road that I had the opportunity to come back for another year and I didn’t take it like that was I was gonna regret it. Then also just academics make sense and I’m going to benefit from that in my future too. I’m just really excited to come back another year and you know take our success this year and just extend it into next year as well.”

The Maple Leafs are back in action March 30, as they take on Spring Arbor University at home starting at 3 p.m.