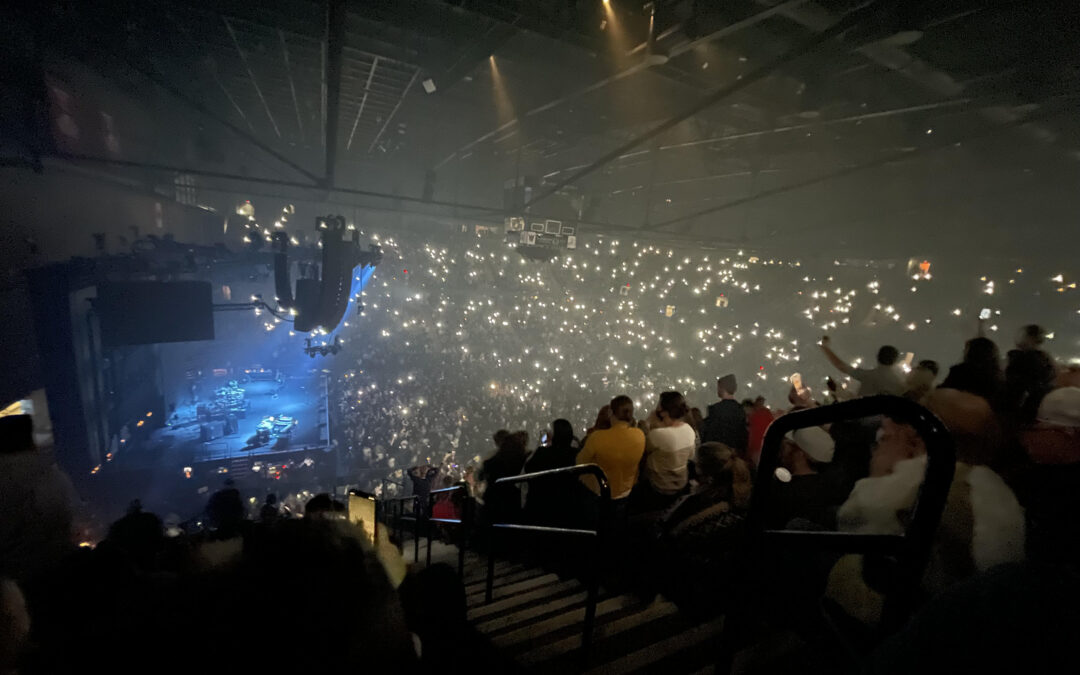 A few months ago I was with Tyson Miller, another Globe Pal, when he showed me concert tickets for Dave Matthews Band were 50 dollars for their show in Grand Rapids. One of my favorite bands? A two hour drive? 50 dollars for tickets? I was immediately sold. We snagged tickets and almost completely forgot about the concert until Tyson said to me the weekend before that the concert was on Saturday. I couldn’t believe it had crept up on us like that but I was excited regardless as this was going to be my first big concert.

You might be wondering why I would go to a huge stadium concert with a pandemic happening but actually Dave Matthews Band has taken quite an aggressive approach in terms of COVID-19, making sure everyone was either vaccinated or had a negative COVID test within 24 hours- a monumental task in terms of logistics, but something that put me at ease.

We made the trip to the Van Andel Arena in Grand Rapids and found our seats. We were positioned to the left of the stage toward the top. The view of the band could have been better obviously but once the music started nothing else mattered for me. As the band came out I found myself getting nervous. A pit had formed in my stomach and I am now realizing that I can attribute that pit to excitement. The band took the stage and started the show with “That Girl Is You” on their most recent album “Come Tomorrow”. I immediately recognized the introduction and from that point on I forgot about everything going on in my life and fully dived into the music.

Now Dave Matthews Band may be one of my favorite bands but they have an incredibly big catalogue of music that not only encompasses their 10 studio albums but also songs they only play live. I ended up only knowing about 50% of the songs. To me it didn’t matter and I ended up making notes of new songs I really enjoyed.

Overall, my first big concert experience can be described as nothing less than religious. I was entranced by the music and how much fun the band seemed to be having playing with each other. As a performer I don’t think I have ever had as much fun as they were having on that stage. Challenging myself to have that much fun performing will now be a standard for me as a performer and as someone who enjoys live music.

Before I knew it the concert was coming to a close. The band left the stage but everyone there knew the encore was coming. They played two more songs and as the first ended and the drummer, Carter Beauford, started the drum beat for the next song I immediately knew the song. That’s right, you guessed it.

“Ants Marching”. The most famous Dave Matthews Band song, one of my favorites, and the song that introduced me to Dave Matthews band so long ago. I stood up from my seat and sang and danced along with everyone else as the 10 minute performance of the song finally ended. I wanted more but knew it was the perfect way to end an incredible experience.

Here’s to hoping that the live music plays on…