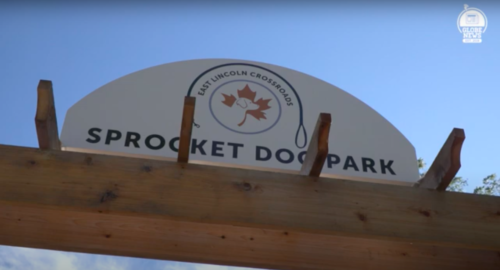 Goshen’s First Dog Park officially opened on Friday September 10th. Sprocket Park has been in the developmental stage since 2017. It is the combined effort of the  East Lincoln Crossroads Neighborhood Association and La Casa. Goshen Parks and Recreation Superintendent Tanya Heyde explains that, “Neighbor works America put on a training for community members to come up with some ideas for bringing the community together. From that training came the idea for a dog park.”

Sprocket park features two fenced areas for both small and large dogs. First-time park visitor Yhovan Alarcon explains the several amenities that the park has to offer its visitors. Alacron states that “There are some big tires or tractor tires. There’s a nice little climbing hill. See a red house there for some small dogs, and some benches add a nice touch.”

A ribbon-cutting ceremony was held a few weeks ago on September 10th to celebrate the official grand opening of the dog park. Heyde states that the ceremony, “included some of the folks from the neighborhood association who have been involved from the very idea of the dog park. All the way up to the completion of it. There were some community members who were there. Mayor Stutsman was there and we had some park board members who attended also, and of course some of the staff who were involved in the construction of the dog  park.”

The park is located near the U.S. 33 underpass in the East Lincoln Crossroads neighborhood. The address is 119 S. Ninth St.