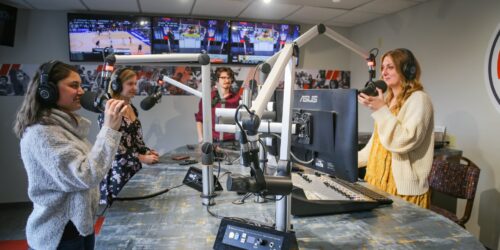 The Broadcast Education Association (BEA) has ranked Goshen College as the number one Audio Program in the country in their first ever rankings from the BEA Festival of Media Arts. Goshen College is also ranked 14th in Film & Video and 14th overall.

“To be named the top audio program in the country is a significant accomplishment for GC,” said Jason Samuel, associate professor of communication and general manager for 91.1 The Globe. “The festival awards, student scholarships and an opportunity to share our knowledge with colleagues from other universities, made it a very rewarding experience.”

The BEA Festival is considered to be one of the most  distinguished international student media competitions. According to the BEA, more than 5,000 student entries were submitted from more than 300 member institutions over the past five years.

The “2022 BEA Festival Student Achievement Rankings” are based on the students’ creative work over a five year period. Entries go through a blind-juried review in seven competitions: Audio, Documentary, Film & Video, Interactive Multimedia & Emerging Technologies, News, Scriptwriting, and Sports. In addition, there is an overall ranking based on the combined achievement across the categories in which 170 schools are represented.

Festival rankings are based on an evaluation of student submissions compared to those at other institutions over a five-year period. The rankings factor in both quantity and quality of student work. The festival recognizes students with five levels of weighted awards: Best of Festival, First Place, Second Place, Third Place and Award of Excellence.

The Festival of Media Arts was created and is organized by BEA faculty to honor the amazing works of both students and faculty.

“We’re like the little radio tower that could,”  said Duane Stoltzfus, chair of the communication department. “We may be planted in a field at the edge of a small town in the Midwest, but our students love being on the air and building relationships one listener at a time. We’re pleased to lead this lineup of major audio educators like American University, Missouri State, Arizona State and West Virginia University.”

Goshen College students also received several individual awards for their creative work from the past year: 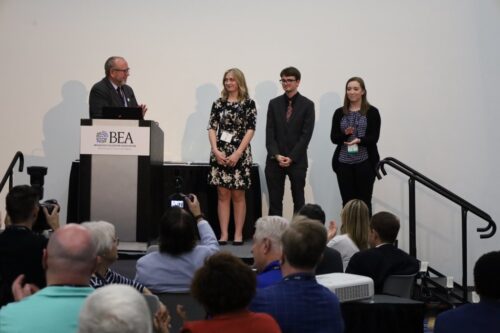 “This recognition from our national association is validation for our program, our students and the way we emphasize hands-on learning as integral elements of our curriculum,” commented associate professor of communication and Globe TV’s manager Kyle Hufford. “Number one in audio/radio and number 14 in film/video took years of hard work and commitment from our talented students.”

Communication Department faculty were also represented at the conference as associate professors, Kyle Hufford and Jason Samuel were selected to be official presenters. Their session, “Combining Radio and TV Operations: Using Convergence to Streamline and Enhance Learning” highlighted the successful integration of department co-curricular media outlets into the new Center for Communication Studies that opened in the fall of 2020. The duo offered attendees specific strategies for combining learning outcomes with leadership opportunities for students.