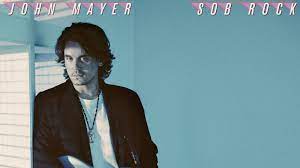 John Mayer’s newest album ‘Sob Rock’ hit the music scene last summer, marking Mayer’s 8th studio album to date. This album had been teased for months by Mayer, who released the fourth and final single “Last Train Home” two years after the third single and only a month before the album release. The vibe of the album seemed to be 80s and was confirmed to be by Mayer who said the album is really a testament to his upbringing during that era and how during the pandemic, when the album was written, he just needed the comfort of that music.

Enough about Sob Rock (Though I could talk forever about it) let’s zoom in and look at that last single “Last Train Home”, new music for the Globe and your Globe Track of the Week.

“Last Train Home” opens beautifully with a simple snare and bass drum beat quickly followed by a wall of synths changing chords every beat. These fast changing chords will eventually become the backbone to the verse and eventually the chorus instrumental. Quickly a beautifully crafted guitar tone,  that could only be described as Mayer-y, swoops in on one note with a beautiful volume swell. The lead guitar intro continues but is not overbearing. It’s a simple melody and only lasts 3 bars. Quickly we are introduced to the meat of the song.

The vocals come in strong with the feel of the song and Mayer’s voice sounding upbeat but the lyrics are somewhat sad when thought through, with Mayer singing sweetly “If you wanna use me/ Then you gotta use me till I’m done”. During the verse the guitar goes away and our only comfort is the synth and drums continuing their well rounded groove.

The pre chorus hits and the feel changes slightly with the chords being drawn out longer and a cleaner guitar tone enters playing a syncopated guitar riff making us feel off balance. Again Mayer’s vocals sound content and full with him singing about how he is “Out of luck and out of time”. A common theme in Mayer’s song writing is him wanting to get the most out of his life and how life moves on and doesn’t wait.

Finally, we are rewarded with the title of the track with Mayer singing that he is “Running for the Last Train Home”. He seems to be toying with the idea of moving on and using the time he has with people who he cares about and who care about him. Love me or get off at the next station he seems to be saying. After this lyric the intro instrumental is back in and Mayer’s lead guitar tone comes back in with another simple short guitar lick.

Back into the verse with more interest being added as extra background vocals hop in and the lead guitar keeps up throughout, creating a nice counter-melody but never getting in the way of the vocals. The final chorus starts and the lyrics “I’m on the last train running/ And I surrender” are repeated as the lead guitar takes us out of the track playing a beautifully crafted guitar solo that never feels overwhelming.

Overall, this track is amazing. I am a huge Mayer fan and have been for about a year. All I have listened to before this album was technically old John Mayer music and it was fun to wait in nervous anticipation for this album. Was it going to live up to the hype? Could it stand up to the Mayer masterpiece that is his 2006 album Continuum? In my eyes it does.

The whole album is a work of art but I think this song captures the 80s feel of the whole Sob Rock universe, while also promoting the feeling of love and searching for someone that Mayer just can’t find.

I think sometimes 80s spin offs can be gimmicky, but this never feels like it. Mayer is putting his own spin on 80s music, taking inspiration from artists of the past but not copying them. As well, this song perfectly showcases Mayer’s new style of guitar. Instead of being hard to understand and sometimes over the top, as his guitar style has been in the past, it is subtle and well crafted. Simple melodies over-top simple chords that hit close to home, and make you feel a certain emotion like all music should do.