The Record wins Newspaper of the Year 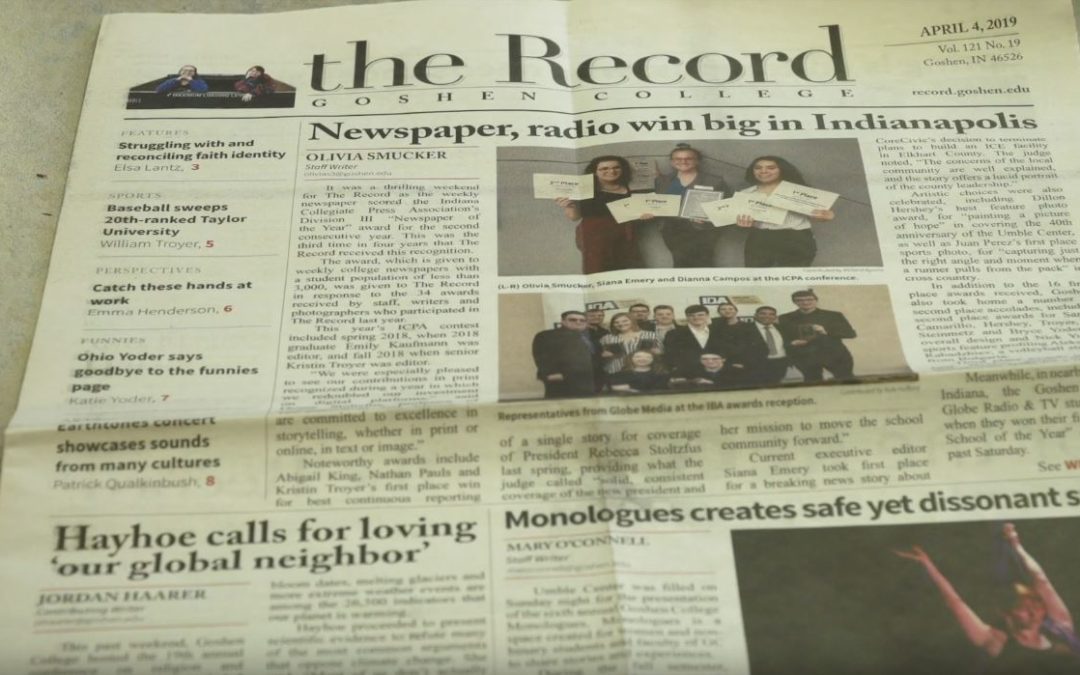 Hidden at a small liberal arts college in Northern Indiana, you will find a newspaper that is like no other. Goshen College’s award winning newspaper took home more awards earlier this month as “The Record” won Press Association Division III Newspaper of the Year.

While in Indianapolis, the newspaper collected 34 total awards. Abigail King, Nathan Pauls and Kristin Troyer took home first place for best continuous of a single story for their story they did on President of Goshen College, Rebecca Stoltzfus. Siana Emery won 1st place for a story about CoreCivic’s plans to not build an ICE facility in Elkhart County. Out of all the awards that the students took home, 16 of them were first place awards. Some of the second place awards were Nick Yutzy’s sports feature on Goshen College Men’s Volleyball player Aleksander Rabadzhiev, and Sandra Camarillo, Hershey, Troyer, Jill Steinmetz and Bryce Yoder for overall design. Korey Stoneburner-Bett’s review of the Yamato drummers on Sauder Concert Hall also took home third place for best review.

The IPCA judged the newspaper from a period starting in spring 2018, when the editor was Emily Kaufmann, and Fall 2018 when Kristen Troyer was the editor. “The Record” has been a staple of Goshen College for many years, and it will continue to be for many more years to come. Some of their segment’s include features, sports, perspectives funnies, and arts. “The Record” is produced by student journalists from the campus of Goshen College as they publish articles weekly for both the fall and spring semesters. These students are advised by Duane Stoltzfus, who was staff editor for “The New York Times” from 1997-2000. He serves as a great influence, and Faculty Advisor for the students who work for the record, and it shows with all of the awards that they won.

It is no doubt that “The Record” has been a great success this year, and that it is a testament to how great the communications department of Goshen College is, and the success that the faculty helps to produce. It seems as if all the communications department can do is win as their radio station 91.1 The Globe took home Radio School of the Year for 2018 as well. To read articles of the record, view their staff, write a letter to the editor, or find any more information about “The Record” you can go to their website at https://record.goshen.edu/.